It’s always something new over here at DestiKNITions.  Today, we’re not just talking to an author who knits, but her character!


Author friend Denise Swanson has many fans of her Scumble River mystery series, and several of them are knitters.  It’s no surprise then, than Denise’s newest release is Murder of a Needled Knitter.  So instead of Denise taking the questions, our answers come from May Dennison, mother of the series’ amateur sleuth heroine, Skye Dennison.  May is a proud member of the Scumble River String of Purls club. She has managed to sneak onto her daughter’s honeymoon by manipulating the groom into booking the same cruise as her knitting club.  If that doesn’t sound like a plot fit for entertaining chaos, I don’t know what does! 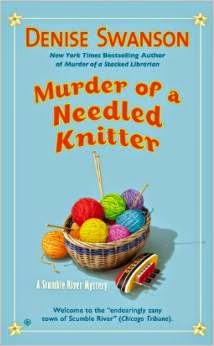 May, what’s on your needles right now?

I’m making a baby afghan. My son and his wife are expecting my first grandchild any minute now.

What feels like your favorite/greatest knitting accomplishment?
A knit blouse in a very fine gauge with lace in front. It took me 6 months, and as anyone will tell you, I’m not a patient person.

What feels like the worst knitting mistake/foible/wrong choice you’ve ever made?
Although this wasn’t really my fault, when I first started knitting I bought a kit in the clearance section of a big box store. The yarn was the tiniest, fuzziest yarn and knotted something fierce. Plus there wasn’t enough yarn to complete the project and the instructions had so many mistakes I nearly went out of my mind.

Straight or circular needles?
Depends on the project, but I like the feel of circular better, they put less strain on your hands.

Metal or wood needles?
I like nickel-plated needles as they seem faster.

Now we come to a few questions Denise herself can answer: 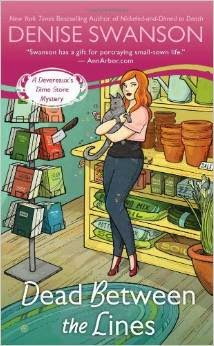 Have you written a knitting character?
In my Scumble River series, my sleuth’s mother, May Denison knits and in my Devereaux’s Dime Store books, Dev hosts a group called the Knittie Gritties in the craft nook of her store.

What’s the last thing anyone would suspect about your most recent book?
I’m hoping it’s the identity of the killer. 😉

So, if you’re looking for a new fiction series that might serve up a few characters who love knitting as much as you do (hey, you already know about my books), check Denise’s books out.  You can visit her website here.