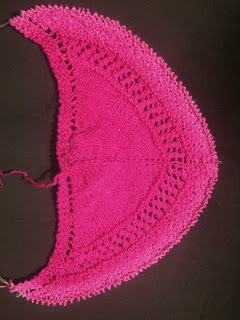 Section three gives us a straightforward patch of K1,P1.  Essentially, you are alternating the knits and purls so that knits stack on top of purls and purls stack on top of knits.  The result is a bumpy texture that offers nice contrast to the smooth stockinette of section one and the open texture of section two—each separated by a “line” of garter stitch.  Since you’re swapping back and forth between knits and purls, this goes much faster in Continental style knitting—another benefit to being “ambikniterous.” While the designer does not name it as such, I have always thought of this stitch as the “Seed Stitch.”

This got me thinking about seed stitch vs. moss stitch—I have always thought them interchangeable, but are they really?  High time to find out, so I did a little research.

“Seed stitch” is universally recognized as knits on top of purls and purls on top of knits, alternating every row, giving us the flexible but bumpy texture we see here.  It’s also identical on both right and wrong sides.

“Moss stitch” is close or identical—depending upon the American or British versions.  American moss stitch is different; it goes in two-row alternations. You stack knits-on-knits and purls-on-purls for two rows, then switch for the next two rows.  The effect is that your “bumps” are two rows high rather than one.

Brits are simpler: British moss stitch is identical to seed stitch.  So, when a pattern calls for moss or seed, you ought to take a minute and consider the source material’s country of origin so you know what’s expected.   That being said, the difference is slight enough that I can’t imagine lives would be at stake should you misinterpret.

In either case, these stitches have some admirable virtues.
Here, though, they create a lovely contrast to both stockinette and more complicated stitch patterns.
Share
Categories: Knitting
Tags: ambikniterousBlurred Linesmoss stitchseed stichYarn & Stitches