Excerpt: Falling for the Fireman 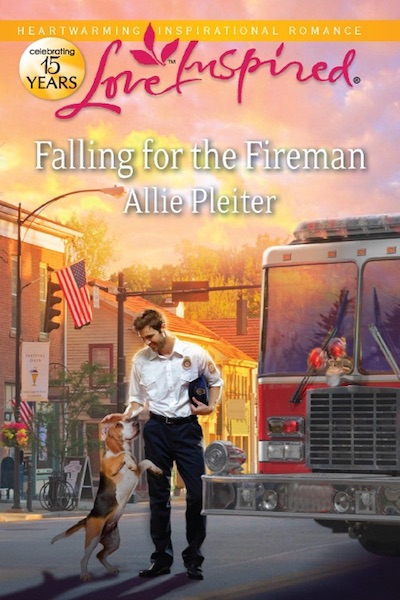 Jeannie Nelworth had the faucet handle in a death grip. It wasn’t that the women’s restroom of The Stew Pot restaurant was a tense place; she just hadn’t expected her nerve to go out from under her quite so completely tonight. Somewhere between picking up name tags and the Merchant Association’s first agenda item, she’d had to bolt into the ladies’ room to pull herself together. She’d found the bright red wallpaper amusing before, but now it felt loud and suffocating.

Abby Reed was predictably right behind her. A best friend can usually see through faked calm, and Abby was as intuitive as they come.

“You are not okay.” Abby turned and threw the door’s small dead bolt Jeannie had forgotten to latch.

“I told Mary Hunnington not to ask you about postponing tonight’s presentation, that you’d say ‘go ahead’ when you shouldn’t have.”

“I like being at these dinners.” Jeannie forced a cheery tone, pulling her hand off the fixture to fuss with her long brown hair that didn’t need fussing. It was true. Normally she did enjoy the monthly gathering of business people in town. The many shopkeepers, hotel owners and restaurateurs that made up Gordon Falls were her family. Even the tourists were part of her life here. That’s why it was so hard to have her sweet shop closed if only for a while.

“Besides,” she continued, “Nicky’d never forgive me for ruining his monthly video-game sleepover. Much as it kills me, that eighth-grade tornado loves a night away from his mom.”

Abby sighed and gave her the look half the other merchants had. She knew her colleagues cared for her, only now their warm but pitying looks made her feel simultaneously welcome and on display. “Really, there isn’t a soul here who would have blamed you if you missed this one. You’re the last person who needs to hear tips on holiday lighting and fire safety.”

Why bother waiting? Another thirty days wouldn’t change the fact that her candy store and home had burned down a few weeks ago. “If I stayed home, what would that solve?” To stay home was admitting defeat, and Jeannie liked to think of herself as the kind of woman who gave no quarter to tragedies like that. “Okay, it’s hard,” she admitted, but even those three words felt too big, “but God is bigger than a burned building.”

Just the mention of her late husband’s name was enough to double the size of the knot in her throat, even after half a dozen years. She’d loved her quaint shop down by the riverfront. It hadn’t been close to the center of town, but she’d always thought that made it feel homey. It had been close enough to catch the riverfront tourists, and back then she, Henry and Nicky used to watch the sun come up over the river as they ate breakfast in their home above the shop.

Then Henry was gone. Now, six years later, the building was gone. “What’s the whole point of faith if not to sustain me through something like this?”

Abby started in, but Jeannie just blinked back tears and shot her hand up in a silent “Don’t.”

After a quiet moment, Abby pulled a paper towel from the ancient metal dispenser and blotted her own tears. “George wants to talk to you,” she said softly. A conversation with George Bradens, Gordon Falls’s Fire Chief, usually meant getting roped onto a committee for some new civic endeavor. “He says it’s about Nicky.” Abby put a hand on Jeannie’s shoulder. “Listen, this is too much. Let me make some excuse for you so you can go home.”

Abby leaned against the red Formica countertop. “I thought we covered this already.”

The room was far too red. Red tile, red wallpaper. It all felt like sirens going off, close and loud. “Well, I’m close to fine.” That’s how she chose to view the raw-around-the-edges feeling that had continued to plague her every day every hour since the fire. The entire month felt like peeling off singed layers, discovering new burns in unexpected places every time she was sure she was done with all that. “I don’t want to go back to the apartment anyway.” That dingy apartment she and Nicky rented now seemed so unbearably temporary. They couldn’t see the river, and they seemed far away from everyone. It was the worst of both worlds. Stuck in the middle, endlessly coping.

Keeping her life on hold while her candy store was rebuilt choked Jeannie like smoke.

“I figure you’ve got five more minutes of old business, then Chad will be up. Really, Jeannie, you don’t have to be here.” Abby caught Jeannie’s eyes in the dingy gold-framed mirror above the sink. “So don’t go home. Go shopping, go eat a pound of fudge, go walk over and sit by the river if you want, but give yourself a break and leave.”

Abby made it sound as if Jeannie could slip out unnoticed. “Every single person in that room will know if I skip out. And they’ll know why Chad’s the fire marshal and George is the fire chief. It couldn’t be more obvious.”

“Well” Jeannie fished for a better reason than her stubborn defiance of a paralyzing fear. “If I leave, how will I know whatever it is George wants to say about Nicky?” She shut off the water with a resolute twist of the faucet. There was nothing for this but to do what she always did: fix her eyes on gratitude and soldier on. And on, and on. She’d worked at being grateful; she’d sent baskets of goodies to George and Chad and the rest of the volunteers at the fire department. Sent, because she still couldn’t bring herself to go into the fire station. The least she could dothe goal she’d set for herself tonight was to sit through the presentation, stay upright, force a smile and be grateful Chad Owens was as handsome as he was thorough.

Don’t look at her. Chad Owens kept telling himself to keep his gaze away from Jeannie Nelworth. He shouldn’t single her out in any way, but his eyes repeatedly wandered over to her tight smile no matter what he resolved. It was a hopeless cause; everyone in the room seemed overly aware of the woman.

Jeannie loved yellow, loved kids and normally exuded as much happiness as twelve people, but she looked pale and drawn tonight, cornered by the collective awkwardness. George kept putting his arm around her, looking out for her as if she needed shielding from the world. That was George, everyone’s unofficial protective grandfather. The town’s most beloved fire victim at a fire safety presentation honestly, he was amazed she showed up at all.

Chad thought Jeannie should have some space after the presentation, an escape from the small tight knot of false casualness that pushed around her after the talk, but George motioned Jeannie out of the group right away, calling her over to where they were standing.

“George,” Jeannie said with an applied smile. “I am fine.” She pushed her brown bangs out of her eyes like a nervous teenager. “Stop worrying, why don’t you?”

“You know very well I won’t. I’m looking out for you, so help me stop worrying by saying yes to my idea.”

Jeannie rolled her eyes, crossing her hands over her chest. “How about I hear your idea first?”

George crossed his hands over his own chest and leaned in. “I want to hire Nick.”

There was a momentary flash of panic in her eyes. “Don’t you think thirteen is a bit young to be a firefighter?”

George laughed. “Every boy wants to be a fireman. But not every boy can be a fire dog walker.” He said it with an absurd importance Chad didn’t feel and Jeannie clearly didn’t believe.

Chad hadn’t been in favor of George’s scheme to hire Nick to walk the portly firehouse hound. Plug certainly needed exercise, but Chad found the gesture lacking. George should know better than to put a cozy bandage on a kid’s enormous trauma. Fire stole something from a soul that could never be restored. Chad knew it. Nick and Jeannie knew it now, too, and some cuddly chore wouldn’t make that go away. Still, no one talked George out of anything once he got a plan in that meddling, generous mind of his. Chad supposed the scheme couldn’t hurt, but he didn’t think it stood any real chance of helping.

“You have volunteer firefighters but you want to pay my son to walk your dog?” Jeannie’s eyes narrowed with a friendly suspicion at the idea. Her long, dark ponytail swung as she gave George a sideways glance. Chad was glad Jeannie recognized George was up to something.

She wasn’t pretty in the stop-a-guy-dead-in-his-tracks kind of way. It was more her energy, her optimism, that pulled people toward her. Those brown eyes always took in the world like it was a fantastic package waiting to be opened. Nothing seemed to keep her down. Last year she’d had her Jeep painted in the same yellow polka-dotted pattern as her store, and while all the other merchants thought it stunning marketing, all Chad could think about was how mortified her son must be to ride in the thing. Still, everyone in town knew Jeannie Nelworth’s Sweet Treats candy store. Half the businesses in the county used her gift baskets, and the woman’s chocolate-covered caramels were nearly legendary.

“Plug would be good for Nick,” George lobbied, smiling as if every volunteer fire department had a dog-walking budget. “Boys love dogs.”

Jeannie let out a sigh. “Well, Nicky seems to need to take care of so…

Falling for the FiremanBook 1Buy Today 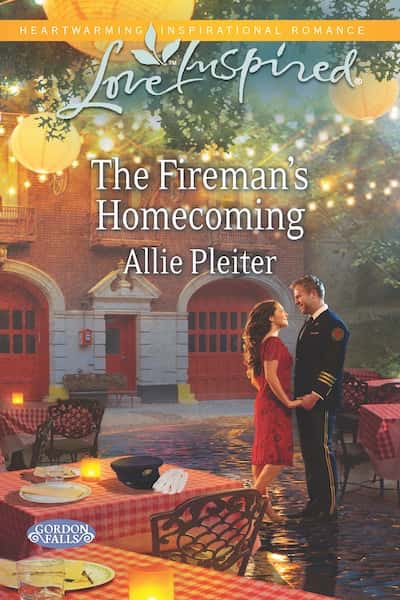 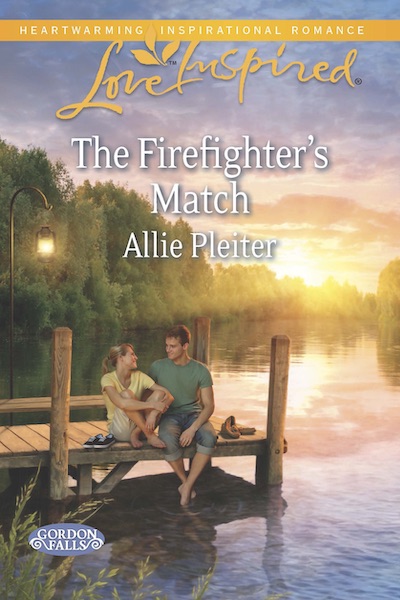 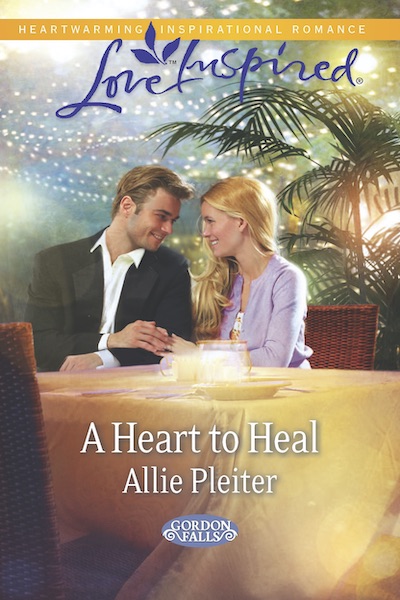 A Heart to HealBook 4Buy Today 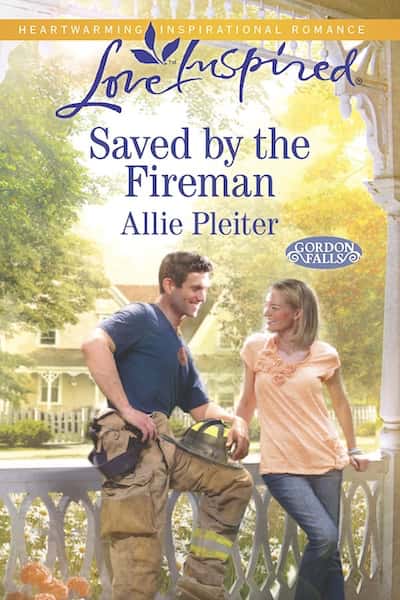 Saved by the FiremanBook 5Buy Today 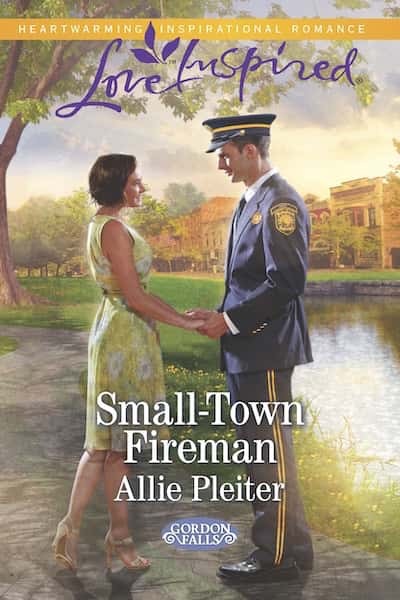