About the Book Buy Book 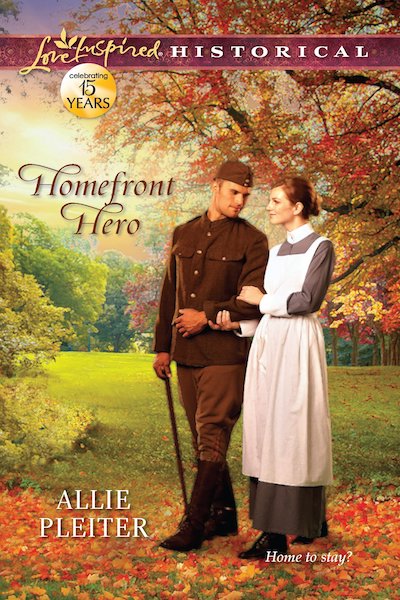 I still can’t believe it.” Leanne Sample gazed around at the busy activity of Camp Jackson. Even with all she’d heard and seen while studying nursing at nearby University of South Carolina, the encampment stunned her. This immense property had only recently been mere sand, pine and brush. Now nearly a thousand buildings created a self-contained city. She was part of that city. Part of the monumental military machine poised to train and treat the boys going to and coming from “over there.” She was a staff nurse at the base army hospital. “We’re really here.”

“Unless I’m seein’ things, we most definitely are here.” Ida Landway, Leanne’s fellow nurse and roommate at the Red Cross House where they and other newer nurses were housed, elbowed her. “I’ve seen it with my own eyes, but I still can barely believe this place wasn’t even here two years ago.” Together they stared at the layout of the orderly, efficient streets and structures, rows upon rows of new buildings standing in formation like their soldier occupants. “It’s a grand, impressive thing, Camp Jackson. Makes me proud.”

Leanne had known Ida briefly during their study program at the university, but now that they were officially installed at the camp, Leanne already knew her prayers for a good friend in the nursing corps had been answered. Different as night and day, Leanne still had found Ida a fast and delightful companion. Ida’s sense of humor was often the perfect antidote to the stresses of military base life. As such, their settling in at the Red Cross House and on the hospital staff had whooshed by her in a matter of days, and been much easier than she’d expected.

Still, “on-staff nursing life was tiring. “There was so much to do,” Leanne said to Ida as she tilted her face to the early fall sunshine as they chatted with other nurses on the hillside out in front of the Red Cross House. “Too many things are far more complicated in real service then I ever found them in class.”

“A free afternoon. I was wondering if we’d ever get one. Gracious, I remember thinking our class schedules were hard.” Ida rolled her shoulders. “Hard has a whole new meaning to me now.” This afternoon had been their first stretch of free time, and they’d decided to spend an hour doing absolutely nothing before taking the trolley into Columbia to attend a war rally on the USC campus that evening.

“However are you going to have time to do this?” Ida pointed to a notice of base hospital events pinned to a post outside the Red Cross House. “I feel like I’ve barely time to breathe, and you’re already lined up to teach knitting classes.”

“I’ve managed to find the time to teach you,” Leanne reminded her newest student.

“Don’t I know it. I tell you, my mama’s jaw would drop if she saw I’ve already learned to knit. I guess you’ve found right where you fit in the scheme of things around here.”

Ida was right; Leanne had found her place on base almost instantly. As if God had known just where to slot her in, placing an opening for a teacher in the Red Cross sock knitting campaign. If there was anything Leanne knew for certain she could do, it was to knit socks for soldiers. She’d run classes for her schoolmates at the university; it seemed easy as pie to do the same thing here. And it would help her make friends so quickly, hadn’t she already? In only a matter of days the vastness of the base seemed just a wide-open ocean of possibilities.

Of course, there were others who were less thrilled at the opportunities ahead of Leanne, namely, her parents. Mama and Papa had come to see her settled in, and they hadn’t left yet. They’d already stayed on in Columbia two days longer than planned. Papa attributed it to “necessary business contacts” here in the state capital, but Leanne knew better. Mama wasn’t at all calm about the prospect of her daughter being an army nurse. Leanne had agreed to meet her parents for a last luncheon before they caught their train, a final goodbye off base before tonight’s rally. In truth Leanne worried that despite already-packed bags, Mama would invent some other reason to delay their return to Charleston.

Ida must have read her expression. “Oh, stop fretting about your mama and papa, will you? Don’t give them reason to stay one more minute. You’re in for a ten-hankie bout of tears no matter what, so best just to get it over with. Don’t you give them one inch of reason to stay off that train.”

Leanne couldn’t argue. She’d declared to herself that even Mama’s fits of worry would not be permitted to dampen the eager wonder she felt to finally be in service. Leanne squared her shoulders and straightened her spine. “I am a United States Army nurse. I am an educated woman” she shot a sideways glance at Ida as she adjusted the colored cape that designated her as a leader of the newly graduated nursing class “and I am a force to be reckoned with.”

“I’ll say an amen to that!” Ida flashed her generous smile that widened further as she pointed to a large new bill posted in a spot all its own. “Speaking of forces to be reckoned with, I reckon our evening will be highly entertaining.” She peered closer at an announcement for the “rousing patriotic speech” to be given by “a true wartime hero.”

“‘Hear the daring exploits of Army Captain John Gallows,'” Ida read aloud. “‘Thrill to the tale of how he saved lives at the risk of his own.’ Well, where I come from a gallows is something to be feared.”

Leanne could only laugh. Some days Ida sounded as if West Virginia were the wild, wild West. “Oh, that might still be true here. The Gallowses are a very formidable Charleston family.”

“Have you met them?”

“I’ve not had the pleasure, but I believe our fathers know each other back in Charleston. A fine family going back for generations.”

Ida leaned back and crossed her arms while eyeing the dashing photograph of Captain Gallows that illustrated the announcement. “Fine indeed. He’s certainly handsome enough.” She adjusted her stiff white apron as if primping for the photograph’s admiration. Ida did like to be admired, especially by gallant army officers. “I can’t think of a better way to spend our first free evening off base. Perhaps he’ll let me sketch him.”

“Why is it you want to sketch every handsome man you meet?” Leanne teased. Already she could see it might prove hard to keep her artistically inclined roommate focused on her duties. Ida was a free spirit if ever there was one, and while she took her nursing very seriously, her adventurous nature already pulled her too often away from her tasks.

“I’d be delighted to sit for you,” came a deep voice behind them. “Especially if you are so partial to handsome war heroes.”

Ida and Leanne spun on their heels to find the very man depicted in the photograph. Complete with the dashing smile. Even out of his dress uniform, for he wore a coat, but not one as fancy or full of medals as the one in the photograph, he was every bit the U.S. Army poster-boy hero. His dark hair just barely contained itself in its slick comb-back underneath his cap. He carried himself with unmistakably military command, Leanne suspected she’d have known he was an officer even in civilian clothes. He certainly was very sure of himself, a long moment passed before Leanne even noticed he leaned jauntily on a cane.

Ida planted one hand on her hip. “Well” her voice grew silky “no one can fault you for an excess of modesty. Still, my daddy always said a healthy ego was a heroic trait, so I suppose I can let it slide, Captain Gallows.” She drew out the pronunciation of his name with a relish that made Leanne flush.

Captain Gallows was evidently all-too-accustomed to such attentions, for he merely widened his dashing smile and gave a short bow to each of them. “How do you do?” He pointed to the sign. “Say you’ll attend tonight’s event, and my fears of facing an audience full of dull-faced students and soldiers will be put to rest.”

“Are you one of the Four Minute Men, then?” Leanne asked. Her father had been asked to serve on the nationally launched volunteer speakers board, called “Four Minute Men” for the prescribed length of their speeches, but Papa had declined. Still, from the superlatives on his bill, Captain Gallows could go on for four hours and still hold his audience captive.

“The best. They give me as long as I want. They tell me I’m enthralling.”

“I have no doubt they do. I’m Ida Lee Landway, and this is my friend Leanne Sample. We’ve just joined the nursing staff at the base hospital.”

The captain tipped his hat. “How fortunate for our boys in the wards. Miss Landway, Miss Sample, I’m delighted to meet you. Tell me what I can say to convince you to come to the rally.”

“We were just on our way over to town early and already planning to attend,” Leanne corrected. “No persuasion will be required.” He certainly seemed a cocky sort, this Captain Gallows.

“I’m not so sure,” he replied with a disarming grin. “I was on campus this morning and one of the students told me she would come, but she would bring her knitting. Not the kind of response I’m used to, I must say. I’m trying to see it as a patriotic act, not an expectation of my inability to fascinate.”

Definitely a cocky sort. “Don’t take that as an affront at all, Captain Gallows. I’m meeting my parents for luncheon and I have my knitting with me right now.”

“Well, I can’t say I haven’t longed for a sharp pointy stick…”