I wasn’t sure if all that unraveling would be tedious or wondrous.

Turns out, it’s a little of both. 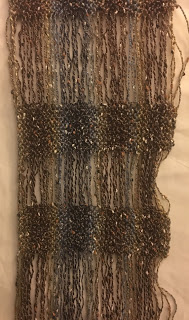 It’s a lot of yarn-wrangling.  The thing feels like it’s one giant ball of loose ends, even though it isn’t.  It’s so open.  I think it might feel less challenging in a bright color, but the neutral colors of this yarn seemed to fade into everything as I was trying to unleash those stitches.  In reality, there are no loose ends to tangle, but it continued to feel as though it were twisting on itself even though it can’t. It’s not tangled, it can’t really tangle, but it feels as if it is on the verge of tangling every time I pick it up.

While I wasn’t quite sure why it would need blocking, I think that “verge of tangling” feeling is exactly why it needs to be blocked.  After being bent up in stitches for a long time, the yarn won’t lie flat.  That contributes to the “tangling” effect.  Once I block it, I’m hoping the long “slots” of open fiber will lay out more smoothly. 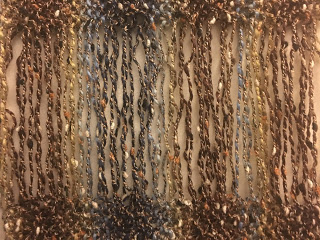 Lengthwise, it’s considerably longer now that the stitches are opened up, but it still isn’t an especially long scarf.  That suits the piece, though, as you would loose a lot of the open effect if you had it looped or knotted.  It’s really one of those scarves to show off flat against a highly contrasting shirt or sweater.  Oodles of texture!