Delightful Detour: Knitting and Doctor Who

Banner by Studio D
Doctor Who and Knitting? Absolutely!
I’ve loved knitting for about ten years.  I’ve loved Dr. Who since college, which would mean…ahem…about thirty years.  I never really thought about any connection between the two until I was asked to combine these two favorite things for today’s post.
Then I did a little research…and found out I am far from alone.

The first connection–and for many the strongest–is obvious: the quintessential SCARF.  Known universally (and in this case we really mean that word) as “the Dr. Who Scarf,” the uber-long strip of stripes was worn by the fourth Doctor in a host of seasons and manifestations.  Knitters have been replicating it for decades, and it is as much an icon as the TARDIS blue box.  It has a pretty decent pedigree, as the doctor claims it was knit by Madame Nostradamus, a “witty little knitter” who’d probably have her own blog were The Doctor to whisk her off to present times. And perhaps she has, for a lovely lady named Tara Wheeler has taken up the cause with admirable abandon.

The Actor Who’s Actually an Expert
On the more obscure side, the blog natknit reminded me that Lalla Ward who played Romana, a companion to the Fourth Doctor (played by Tom Baker, who rocked aforementioned scarf) actually has a line of knitting books out there.  There are many famous actors who knit…surely our Whovian performers should be among them. 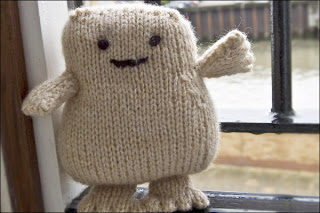 If your tastes run more to current events, we’ve got that covered, too.  The Doctor has always stirred up controversy wherever he goes, so it should come as no surprise that he’s stirred it up in the knitting world as well.  Knitter Whovians made the news recently when BBC got supremely cranky about someone posting knitting patterns to create characters from the series.  When is knitting a TARDIS “fan crafting,” and when is it copyright infringement (or is that copyright intarsia)?  Us crafty types, we always fuse our passions.  Etsy is filled with Who goodies.  I can’t say I wouldn’t adore a plush little Adipose if I had the time and inclination to make one.  And yes, I did try and get a “TARDIS” vanity plate for my blue Honda pilot–it is a big blue box that travels, after all.  Is that worthy of lawyers descending on me like a herd of Daleks?

The On-Screen Nod to Knitting 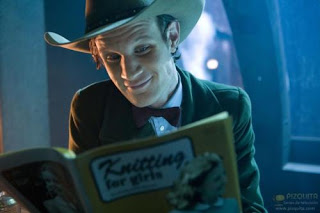 Most recently, we learned The Doctor takes an interest in yarn and needles.  How many of us KnitWhovians gasped in joy during “The Wedding of River Song” to see Matt Smith with his Doctoral nose in a copy of “Knitting for Girls”?  And why not?  Real men knit.  Creative, adventuresome, clever men knit.  Men who know “bowties are cool” would know knitting has been cool for centuries.  Maybe the Doctor knows knitting has been cool for millennia.

The Dare
Hey BBC, I publicly dare you to show our beloved Doctor knitting in a future episode.  Knock yourself out–make it alien yarn with time-altering capabilities.  We’ll accept anything crafty and clever from our beloved Doctor.  But I’m warning you, he better not be wiggling needles with the ends pointed up in that fake knitting I detest (DestiKNITters, you know what I’m talking about). Should BBC need an on-set consultant, I just happen to be available.

Had I a time machine, I’d ratchet it back to give me enough time to knit you the yards of stripes a decent Dr. Who scarf requires.  But I don’t–I don’t even have a Honda Pilot with a “TARDIS” plate.  But I do have a copy of my most clever book with knitting in it, “My So-Called Love Life.”  Leave a comment with your email address (duly spelled out with [at] and [dot] for your protection) and I’ll draw a winner at 5pm CT Saturday.

But don’t stop there!


The Grand Prize: Season 6 on DVD!
To enter the grand prize giveaway, please leave a comment with your name and email address. You may enter once at every stop on the blog tour for a total of thirteen chances. The Grand Prize giveaway is limited to the US and Canada, due to regional restrictions on the DVD. Individual contest will close at the discretion of the author, but the Grand Prize contest will accept entries on any site until midnight CST on December 24th. We will post the winner on December 25th, and notify the winner via email.


The Next Stop
And don’t stop here…hop in your cyber-TARDIS and travel tomorrow to the 13 Days of Dr. Who’s next stop: Sarah Enni: The Doctor and How He Changes His Companions’ Lives at www.sarahenni.com
Share
Categories: Knitting
Tags: adiposeDr. WhoknittingnatknitscarfTARDISTom Baker