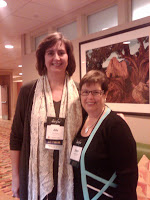 If you are a knitter and a writer, it doesn’t get much bigger than Debbie Macomber. The pioneer of “knit-lit,” Debbie’s life-long love of knitting has produced some of the most beloved fiber-y fiction on shelves today. I was thrilled right down to my dpn’s to have the opportunity to sit down with her as both of us attended the American Christian Fiction Writers Conference in Denver this September. I’m on the left, if my height hasn’t already given me away.

What’s on her needles? Vests for her granddaughters, Qiviut (musk ox underhair? How exotic!), a feather and fan shawl pattern she says is giving her fits (get in line, Debbie), and she’s just finished a pair of booties for a forthcoming grandchild.

New York Times bestselling status aside, you have to respect a woman who’s completed an intarsia blanket on size #4 needles. As you’d expect, she has some great stories. Like the time she asked her husband to unravel a stalled project so she could re-use the yarn, only to discover he’d unraveled her current sweater WIP. 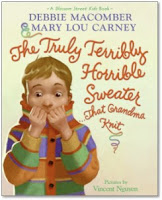 Or the less-than-enthusiastic reaction she received from her grandson when she knit him a sweater–in true Debbie Macomber fashion, that particular tale has been transformed into a children’s book: The Truly Terribly Horrible Sweater . . .That Grandma Knit. With–of course–a child’s sweater pattern inside.

Debbie’s living a fantasy of many knitters–when I asked her about unfinished projects, what I believe to be the challenge of most knitters I know–Debbie admitted she normally finishes most things, but pays people to finish projects for her if need be. Imagine being one of Debbie Macomber’s personal knitters! Now I want knitting minions. I’d better sell a whole lot more books.

And her office is above a yarn store–her own! Called–naturally–“A Good Yarn” after her groundbreaking novel. Next to an ice cream store. I hear a new DestiKNITions episode calling…

Debbie’s love of knitting is fierce as anyone’s. “A gift from God,” she describes it, and it’s no cliche. Struggling in school as a young girl, Debbie say God planted the idea in her head one day to learn to knit (no one in her family had taken up the craft). Her mother took her to a yarn store, and knitting became her salvation. The sense of accomplishment and creativity garnered from knitting became a lifeline for her at a challenging time. How many of us would join her in saying knitting has been our lifeline? If we lined ourselves up, I bet we’d circle the globe. Sort of like my stash.

While we were talking, another woman came up and joined the conversation. Three strangers instantly, warmly bonded by what we do with yarn and pointy sticks. Makes you wonder how much better the world would be if more folks knit.

Awesome! I want personal crocheters too – in my dreams LOL. I love reading Debbie's books.

Great post, Allie! You and Camy make me want to start knitting again! Last projects were several years ago when I made long scarves as presents using huge needles and double yarn of a crinkly variety (is that correct terminology?) and eyelash yarn. They turned out great & I kept one that I use for me. My mom was an avid knitter for many years so I guess a little of that rubbed off. Then I took up cross-stitch and then I took up writing and that ended my crafting career. Now I knit words together instead! But you're tempting… Read more »

Too bad we never met at ACFW–I'm a tall knitting writer also!

I haven't learned to knit – yet, LOL – but I'm addicted to crochet. I've loved Debbie;s books…just wish she had some crocheting ones, too. I read all of her earlier books.
I'm also a writer, though the scale is definitely not balanced between the two as the size of my stash can testify!