It’s not just authors who knit–agents and publishers do, too!  Today you’ll meet my stellar literary agent, Karen Solem of Spencerhill Associates.  Here’s her interview: 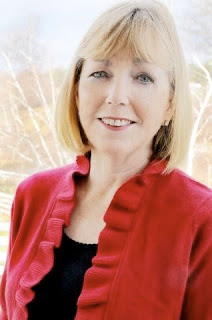 What’s on your needles right now?
I’m as usual working on a few things at one time.  I’m making a light jacket out of Tahki Ripple yarn that I like because it looks like crochet which I don’t know how to do.  It’s three quarters done and I just have one panel left before blocking and putting together.  Then I’ve just finished a shawl — I loved that Irish wool, such a gorgeous green, only fringe left to put on.  Lastly I’m just starting a rather simple gold sweater.

What feels like your favorite/greatest knitting accomplishment?
The greatest was probably my first as an adult.  I made a light cotton sweater to wear in Florida.  It has a dropped stitch border.  As a teenager I made a Norweigan sweater using a pattern I’d bought while traveling, so it was in Norweigan and there was that moment where I had to sew up the front and cut!  But it works.

What feels like the worst knitting mistake/foible/wrong choice you’ve ever made?
I make mistakes all the time but that’s the way one learns, I figure.  Mostly it’s sizing issues.  I’ve had to reknit and reknit but luckily I have to knit them smaller 🙂

Straight or circular needles?
I prefer straight, don’t like the weight on the circular.

Metal or wood needles?
I love the feel of nice bamboo needles.

Coffee or tea?
Again, both — even I see a pattern here.

Have you read a well-done knitting character? (I told her she couldn’t cheat and say any of mine, by the way…)
Yours, of course, and Debbie Macomber‘s and The Friday Night Knitting Club.

What’s the last thing anyone would suspect about your knitting?
That I’ve done as much as I have because I seldom wear them.   That is something I’m determined to change!

Now you know why Karen and I get along so well!  Not only is she a wise woman and an astute agent, she’s a smart knitter.