Knit Along: Cupcake Cutie Hat from Needles 'n Pins - Day Who Knows What?

I started this project in March, before life exploded into a ball of medical chaos. There’s something wonderful, however, in having this be the project that awaited completion. Babies are a good antidote to just about anything (except sleep deprivation, perhaps). It feels good to make a baby hat…no matter for whom our out of what or when. Cuteness knows no season. 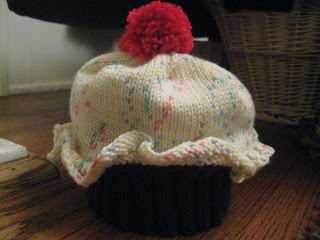 The section of this hat where you switch colors, a clever purl row that lets you pick up stitches for the little frosting ripple in the most ingenious way, is a gem. I think it’s my favorite part of the hat.

My least favorite part: I still rot at pom-poms. It’s not the pattern’s fault. You’d think a woman with a college degree capable of penning over a dozen published novels could make a pom-pom, but you’d be horribly wrong. My pom-poms alway look mangey (harken on back to the DC’s cabled scarf in case you’ve forgotten). Next time I’ll either purchase them pre-made (don’t sneer, it’s senseless to ruin a good project with a mangey pom-pom) or skip it in favor of another adornment. A little i-cord bow or something.

This week I get to plant this confection on the tiny head for which it was made. The baby has long since been born, and she’s a beauty. There’s just something poetic about marking my endurance through a life-threatening disease by honoring a new life. I’ve decided I don’t celebrate birthdays nearly enough. They deserve more attention.

Or maybe, who needs to wait until a birthday. I hear a real cupcake calling my name….

Allie, you should check out the pompom makers from Clover. They are fun and make great pompoms! Stop by String Theory and I will give you a demonstration. Janet

that is just about the cutest baby hat ever! glad you got to finish it.