Is cupcake an adjective?

It’s starting to take on cupcake-ish attributes. Not that you can really use “cupcake” as an adjective, but since I’m a professional, I’ll rise to the challenge. I don’t think it’s going to really shine until I put the ruffly layer that goes between the cake and frosting (hang on, that should be soon). Still, it’s pretty snazzy in its present state. 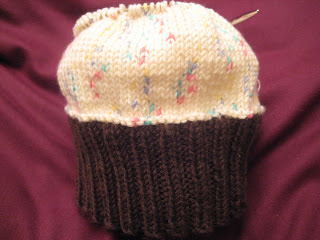 I have only one gripe–and it’s highly fixable. And I can’t really complain because it’s a gripe that might actually suit you. This was created for a first birthday present, so it’s one-year-old size if you make it according to pattern. The baby who’s head I want to “frost” with this isn’t born yet, so I find I’m wishing it were smaller. I may have enough yarn left over to crank out a scaled-down cupcake when I’m done with this one, so there’s hope. I’m smart enough to also know that since I have teenagers, it’s been well over a decade since I’ve spent quality time with a newborn. And I gave birth to “whopper” babies–9 pounds and 9 pounds twelve ounces respectively (!!!)–so even my own experience makes me a poor judge of newborn baby head size.

Still, I smile continually as I knit, anticipating the cutie who’ll wear this cupcake cutie.

I’ve always said, “I don’t want any more children. I just want to dress other people’s children.” Or, evidently, I just want to knit for babies that can’t keep me up at night.

My dog keeps me up at night. Maybe that’s why I’ve never knit the little diva a sweater. She’s too oblong to be a cupcake…eclair cutie dog sweater? I think not.