“Better than a poke with a sharp stick.”

This is the phrase that comes to mind as I contemplate my venture into needlefelting. I’m going to spend the next week poking something with a very sharp needle. Were I a bitter woman with an axe to grind, this might sound tremendously appealing. The sheep on the box is adorable, but I have grave doubts about my ability to recreate it’s fuzzy charm. My sheep might lack…um…appeal. Be warned–while I’m crafty in the knitting department, my art skills leave a lot to be desired. I’ve botched more MOPS crafts than I care to admit… 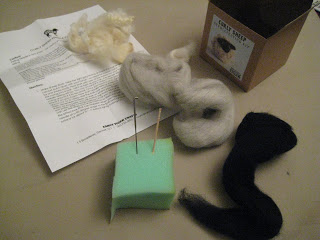 Since the kit tells me I’ll make two sheep, I’m hoping to make one of them a contest prize for my upcoming novella Bluegrass Easter, which has several sheep in the plot. However, it could be I will not end up with anything anybody wants to win. I’ll make the sheep one at a time–just like the directions say–so that perhaps my second sheep effort will benefit from the errors of my first.

Step one was to roll my grey roving into a ball. I think I can handle that. Basic first grade clay skills in this procedure. While it took me a few tries to get the roving to roll the way I wanted it (it’s tricky stuff), I was rather happy with the results.

Then, I got to poke my ball “over and over” to harden and condense it. And well, that was strangely satisfying. 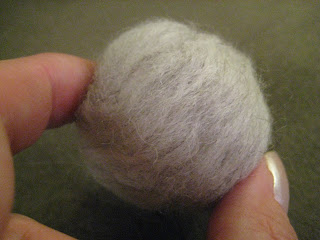 My husband happened to have Steely Dan’s “Josie” on the stereo at the time, and the tempo was just right. I found myself smiling as I did this. And no, Band-Aids were not required. I have not yet inserted the very pointy needle into my very vital fingertips. As a writer about to head into a tight proposal deadline, damaged digits would put me at a considerable disadvantage (but yes, you can type with Band-Aids on, so there’s still some hope.

Next episode we start on the tricky business…the head and ears. Things could get ugly…literally. Stay tuned.

Ah, I'm not the only craft-challenged person out there then. I feel better. can't wait to see your sheep. It will surely be better then my cotton-ball sheep from last Easter. 🙂