Allie had a little lamb…

I was not expecting to enjoy this so much. It’s sort of like Play-Doh for adults–there’s a visceral joy to it that defies explanation. I’m not at all sure my sheep will come out looking anything close to the cheerful breed on the kit box, but it isn’t looking like a nuclear mutant, either. A little aardvark-y, yes, but I think it may be recognizable as a sheep in its final form. And yes, aardvark-y is a word. Professional writer at the helm here–I have a license to manufacture adjectives.

Two things struck me as I made the face and ears. One, that my sheep looks dangerously close to Nick Park’s (of Wallace and Gromit fame) creation Shaun the Sheep. It’s in the eyes, I think. It surely lacks the tell-tale toothy grin of Park’s characters, but the roundness of the edges reminds me of his style.

The other thing that struck me was a direct counterpoint to my surprising enjoyment of this project. I was startled by how elementally wrong it feels to stab something in the eye. Even if the stabbing is how that eye is created. Needle-felting is, at its most basic, stabbing roving repeatedly with a very sharp needle. 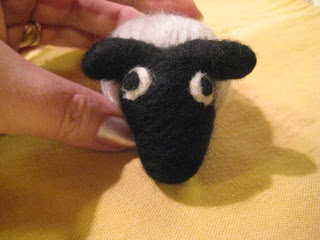 I knew the ball of roving had no sensory perception. It could feel no pain. It could not be oppressed or assaulted. Still, I couldn’t get past the guttural revulsion of sticking the thing in the eye over and over. I was glad, relieved even, when the eyes were finally formed. I exhaled a breath I hadn’t even realized I was holding. Personification gone oddly wrong.

Further proof that this tiny thing is powerfully alluring? My teenage daughter wandered by as I was making the face and read the directions over my shoulder. “The kit makes two sheep?” she asked coyly. I knew what was coming: “Could I make the other one?”