This is a nice segue from the lacework scarf, because it is a new skill for many, and it represents a challenge. Entrelac, like the complex yet workable triple pattern in the last scarf, is a see-it-to-believe-it experience. It’s perfectly natural to stare at the instructions in disbelief. They don’t seem to add up to full rows, let alone straight rows. Which is because, well, they don’t. You’re essentially tacking back and forth like a sailor, veering left and right to eventually get yourself straight ahead. The last time I knit entrelac, I was in a particularly difficult spot in my writing career, and I thought the indirect nature of the progress was the perfect metaphor for what I was feeling. Entrelac is a comforting sort of pretty confusion. Weaving in and out.

Okay, enough esoteric business. I was itching to get this cast on to my new Signature needles. Someone asked me yesterday if they were “worth it.” The answer is YES. But, they were not worth taking on the plane–they are sharp little instruments, and I could just picture of TSA folks having a field day with their evil uses. Plus, I must admit, I’ve found I needed a less slippery needle for this–at least at first. So back onto my trusty Lantern Moons it went. 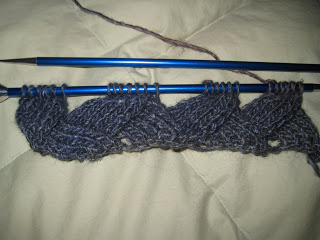 You make triangles at first–three or four of them depending on your scarf size. Again, the trick here is to simply follow the directions. It won’t seem like it’s working at first. Things will look like they’re heading in the wrong direction. Press on. It will take you four rows (two left leaning and two right leaning, with the tricky side triangles in between), before you’ll grasp the overall nature of this. And yes, if you’re like me, you’ll mess up the second row. This looks like weaving, so you’ll have an intersection of four “corners” when two rows meet up. Unless you second guess the row turn because it doesn’t look right and end up with a five-pointed intersection, which looks more like one of those dastardly circles I found driving in Washington DC than anything you want to wrap around your neck.

The Noro Silk Garden feels a bit scratchy, but I have faith that it will wash up soft and lovely. The colorplay is just divine–each rectangle becomes its own little color block, showing off the pattern to perfection.

PS, I’m currently knitting at a conference, which means I get to knit in public for hours at a time, so you can imagine how much fun I’m having!

Ooooo, that looks hard! But very nice, too!!

Where can I find the pattern? I'd love to try it.

Where do I find the pattern to that scarf? I'd love to try it. I have some good yarn to try.

Lena-
There are dozens of entrelac patterns out there. Feel free to contact A Tangled Skein. Or, if you like, here's a link to a free on pattern on Ravelry using the same yarn I used.
mindseyeyarns.com/resources/patterns/entrelac_scarf.htm