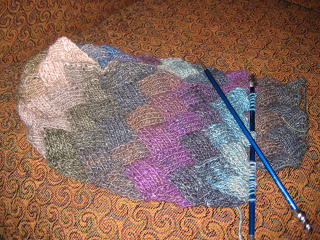 As I was “trucking along” (a verb I learned from Starla at Crafty Hands in Bowling Green) on my scarf, a wondrous thing happened. My daughter–at the ripe acerbic age of seventeen–walked by and took a look. “That’s cool,” she said with an astonishing sincerity. “Seriously, no lie, that’s cool.” Her voice had that can-I-have-it? tone that lets you know you’ve actually caught the illusive teenage attention. I can think of no higher compliment. And it speaks to what I consider one of entrelac’s best qualities: it’s mighty impressive. Makes you look like a knitting ninja without all the brain-boggling charting of lacework. Or the finger-tangling complexity of fair aisle or intarsia. You get a lot of bang for your buck with entrelac. As for daughter’s implied request? Well, I might let her borrow it, but this baby’s mine. 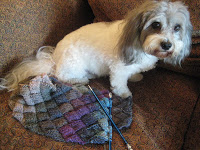 As I was taking the photo for my progress, who should decide to get in the act but Bella, my Havanese. Who am I to deny the diva her ten minutes of digital fame?

The other thing that happened this week was that I was stuck in one of those meetings. “Info dump” meetings, where you sit in a hard plastic chair and watch people tell you stuff you already knew. Worst of all, this meeting was a virtual repeat of an earlier meeting (shouldn’t they warn you of that kind of thing). Ninety minutes of squirmy boredom.

What was I thinking? I knew the time-wasting potential of this meeting and yet I was too cowardly to tuck my knitting into my handbag. Truth is, any offense I might have given people visually (you know the assumption–”I’m knitting because you’re boring me”–which in this case could have actually been true instead of just wrongly concluded) was nothing compared to the negative thoughts I was sending out into the room. I actually considered getting out my Blackberry and checking email (something I can’t abide in meetings), but I happened to know I’d get no signal in my present location. I was half-serious when I asked my husband what games his cell phone had. I found everyone’s questions annoying and repetitive. I fidgeted. I whispered judgmental comments into my husband’s ear until he rolled his eyes. Not pretty.

My original theory was confirmed: I am an ugly person, an impatient, snarky beast when I feel my time is being wasted. The universe is far better off if I knit. I extend more grace, listen better, cut folks more slack, and won’t jump down your wheel-spinning throat (my assessment, not your value) if I have sharp pointy sticks in my hand. I feel like I should have a knitting bag made that says “Really, it’s better this way” emblazened on the front.

Because, really, truly, everyone’s better off if I’ve got my knitting. I bet even sheep agree.