Knit Along: Leg Warmers from The Yarn Company - Day 4

I have come up with a handy coping mechanism for my wicked case of “second sock syndrome”–or in this case, “second leg-warmer syndrome.”

When I bound off the top of the first leg-warmer, I was NOT ALLOWED TO GET UP OUT OF THE CHAIR until I had cast on and accomplished an inch of the second leg-warmer.  As a matter of fact, I wouldn’t allow myself to seam up the first piece until I’d done an inch of the second.  Sort of the knitting version of Mary Poppins’ adage “well begun is half done.”  Now that I’m started, it doesn’t seem like such a monumental challenge to keep going. 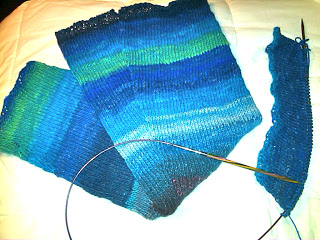 Now, don’t get me wrong.  This did make for a rather miserable 90 minutes as I cast off, cast on, drug myself through the first inch, and then did my least favorite task of all:  seaming.  I hate seaming.  And this twisty yarn kept tangling on every stitch, so that even a couple of decent TV shows and half of a good movie didn’t redeem the time.  This was sheer I’m gonna get it done willpower–something I don’t often possess in great quantities.

Will they end up on legs?  Or adapted to be sleeves?  I don’t know yet.  I do know, however, that there’s now a halfway decent chance that there will be TWO of them.

And that’s a victory.