Knit Along: Mohair Shrug from Showers of Flowers - DONE!

I finished it…with a few modifications. I did four pattern rows instead of five because the shrug felt just too big–all the way to my elbows–with the fifth row. And the fact that I had only hours until the party may have had something to do with it. For the same “volume of fluff” reason, I opted for a button closure rather than the ties called for in the pattern, but more because I had this really cool purple button than any time-saving inclination. It’s a stunning piece, and very warm. 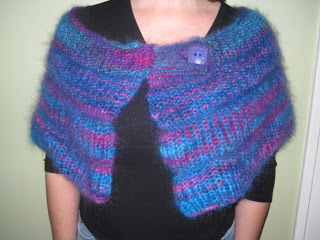 I wore it to a winter party with a sleeveless shell and was quite toasty. This will be my Christmas Eve adornment, I’ve decided. All in all, I’m happy with the results.

Will I go full-tilt knit-til-you-drop like that again? Probably not. I’m glad to know I can pull it off, but it took all the fun out of it to knit until my fingers hurt. While I did get very far in my audiobook version of Diana Gabaldon’s Echo in the Bone (and that’s a 45 hour audiobook!), it was just too much knitting. All achievement of product and no enjoyment of process. Still, I had a point to make. So much of my life has defaulted to “Plan B” lately that it felt insanely satisfying for something to go the way I originally planned. The shrug was as much emotional statement as it was fashion statement.

This piece taught me a lot. I learned a new skill, I learned when to go for broke to finish a piece and what’s gained from such a commitment. I learned I don’t like knitting for hours on end, up against a deadline, because us writers have way too many deadlines in our lives as it is. But I also learned that sometimes, knitting is the one thing in life you can control…and some days, that’s priceless.

Next up from Denver? An adorable, light-hearted needle-felted sheep. The perfect counterpoint to massive-scale knitting. 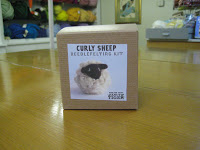 If I don’t stab my finger. Band-Aids at the ready…