Behold the bind off!

Three hours. That’s how long it takes to do a picot bind off of 400 gazillion stitches. Or, measured a different way, all of SPYKIDS 3 (not especially distracting even if it does have Antonio Banderas and a minute or two of George Clooney) and half of THE WORLD IS NOT ENOUGH (highly distracting with a whole lot of Pierce Brosnan). My fingers hurt, but no way was I giving in. I was going to master this and I did. Behold the bind off! 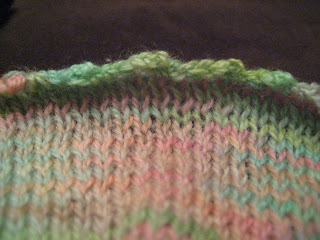 Now, I must admit I am nervous about the curly thing it’s doing. I’m choosing to believe it will flatten itself out in the blocking, but I’ve been led astray by false hope before. Not that a curly end would ruin the floral metaphor of this scarf–it might work, but I don’t know how anyone will notice my stunning (or perhaps “stunned” is a better word…it’s a little shaky looking) picot bind off if its curled under like a potato chip.

The overall effect, however is very nice. I can visualize the scarf now, and I was delighted to sink my fingers into the green fuzzy delectible-ness and begin the second part. It begins again…that momentum of beginning a new project, or even the next part of a project. Hope springs in every cast on, doesn’t it? 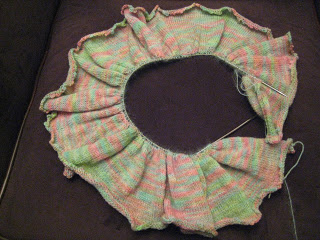 I’ll be back in a few days (and a few rows) to let you know.

I'm so impressed! I think the curly part will flatten with blocking. At least, my curly edges flattened with blocking when I used a picot bind off for a shawl. The picots make blocking easy, at any rate–I just threaded the fishing line through the picots in no time.
Camy