Knit-Along: Sampler Scarf From It's A Stitch | Author Allie Pleiter

Knit-Along: Sampler Scarf from It's A Stitch

Welcome to the “Knit Along With Allie” section of our blog. I’ll be tackling both the projects offered by It’s a Stitch and knit, starting with the Lacy Sampler Scarf from It’s a Stitch.

Now, as you can imagine, it took all kinds of self control not to dive into both projects the minute I had the delectable yarns in my hands, but that would make for confusing reading (even though most knitters I know deeply understand the concept of having way too many projects in process at once. 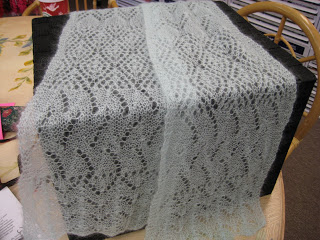 The scarf is divided into two halves, each with five different patterns divided by a simple eyelet strip. Over the next two weeks, I’ll share my experiences with each of the pattern sections with you.

I was able to get started right away. That’s putting it nicely. It’s closer to the truth to say I could barely contain my urge to start knitting once the yarn was in my hands. I admit it, I cheated. While the pattern called for size 6 needles, I had only a size 5 circular needle with me. However, I had completed the project I’d brought with me, so really, this was a matter of airplane survival over pattern obedience. I figured one section in one smaller size wouldn’t kill me, whereas being stuck in an airport without knitting threatened a far greater harm.

The pattern was a good level on which to begin. The edges scalloped right away (I love those instantly visible results), but this is one of those patterns where loosing your place is disastrous. My addi Turbo circular needle didn’t have quite the sharp point needed for lacework, but I managed. I later switched to a lovely handmade dark wood set of straight needles I’d purchased in Berea Kentucky, 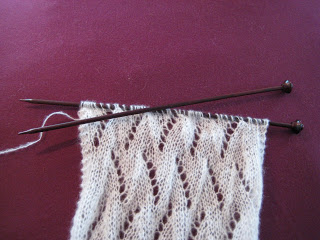 and was glad for the contrast between the dark needles and the white wool. I confess to calling the pure white yarn a few impure names while undoing a few rows, things went along swimmingly.

So far so good. I’ll check in on Wednesday to see how the next section goes.

Hi Allie, Thanks for dropping by my blog and leaving a comment. I am loving your book, BLUEGRASS COURTSHIP. What a surprise to see that you are a knitter, too! I don’t do much anymore, but my daughter is a true knitting craftsman. You probably know her from delanaknits.blogspot.com.

I love the sampler scarf!