Knit-Along: Sampler Scarf From It's A Stitch--part 3 | Author Allie Pleiter

Knit-Along: Sampler Scarf from It's A Stitch--part 3

Yes, I know I said I’d be back on Friday, but any of you who know the particular knot that appears in a mother’s stomach when the caller id reads the school nurse, you know my Friday didn’t go “as planned.”

I warn you NOT to attempt this in anything less than uninterrupted silence…say, your local monastery or library or a cabin in the woods. Actually, it’s probably not that bad, but this isn’t peaceful knitting. 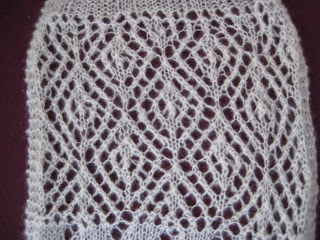 Like most challenges, it produces impressive results–the diamond mesh is beautiful–but gut-wrenchingly hard to keep track of with loads of repeats. Get out your row counter, your post-it-notes, or make yourself a spreadsheet. If you’ve ever been one to write out each row on a separate index card, (I know folks who transfer the pattern to computer labels and affix the labels to individual index cards, which might be a particularly good plan given all this pattern’s repeats), now’s the time.

Or go a step further and make yourself a martini. Or a cup of very soothing tea (yes, alcohol would only exacerbate things here, I’m sure).

Don’t get me wrong, I’m convinced the delicate beauty of this panel is worth the anguish. My dark needles with sharp points came in very handy for all those SSK’s and passing over stitches. This is a pattern to get lost in, and I don’t mean that in a good way; twice I had to take out several rows, attempt the vaguest of guesses as to where I was in the pattern, and plunge ahead. It is beautiful, but I think I understand why they put diamonds on the advanced-level ski slopes now. Were I attempting an entire scarf of this, my needles would be imbedded in the ceiling by now.

Hang on until next week—things can only improve.

One good note: when I show my work in progress to other people, especially non-knitters, they are terribly impressed and think me some sort of artisan. Cool.