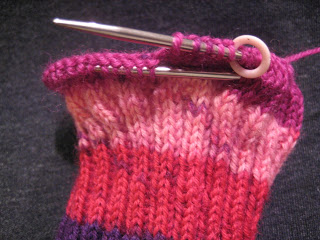 They’re growing on me…

Now that I’ve gotten to the stockinette stitch portion of the sock, my affection is growing for these tiny wonders.  You can really speed through the rounds when you don’t have to worry about pulling the stitches tight to bridge over double-pointed needles.  It takes a little getting used to, I admit, but I can definitely savor the advantages.  Plus, it’s much less troublesome getting the project in and out of a bag and people don’t back away from you when you pull them out. You know that look some folks give you when you produce the equivalent of an eight-pointed hedgehog out of your bag? Even though you know it’s only a harmless sock?

Speaking of points, you’ll definitely want a set of point protectors on these circs.  Shameless plug here: the ones inside the KnitKit are just the right size.

On a side note–sometimes you have to make sure you’re using your skills for good.  You know, knitting for other people like those offspring of yours.  And if your offspring live anywhere within ten miles of a video game console, chances are “Sackboy” is going to come up.

This is Sackboy, and he’s the hero of a game called “Little Big Planet.”  That’s right, he’s knitted.  Which means you can knit him–there’s a selection of patterns scattered across the internet.

And so, in between writing and my DestiKNITions projects, tonight I cast on Sackboy.

Because, if you don’t know this already, you do weird stuff like knit video game heroes when you’re a parent.