I have the blues…but are they yours or mine?
Life is like a box of crayons.  There are always more colors than you think.  Even when you’re talking about the same colors. 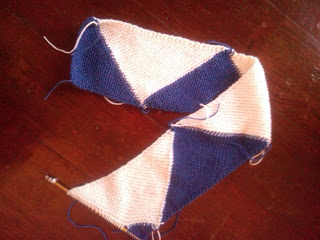 Take blue, for instance.  People seem to get really invested in their blues.  Knitting my Super Scarf at the Kentucky Book Fair this weekend (where blue and white mean University of Kentucky, not the Indianapolis Colts, so you get into a lot of fun conversations), I had the opportunity to explain the concept of the massive public effort to “enscarf” the Super Bowl volunteers.  All the knitters loved the concept.  The idea of 8,000 hand-knit scarves is entrancing.  You could literally watch their minds imagine that mass of blue and white yarn.  I know I’ve been doing it every time I pick up my scarf.  Often, people would ask if I was knitting UK neckwear, because the colors are so close.
Notice I said close.
One woman eyed it carefully, and then pronounced that it couldn’t be a UK scarf because it wasn’t really “Wildcat blue.”  Now, over the seven hours hours of the fair I had a large sampling of UK blue–hats, sweatshirts, t-shirts, even baby clothes–and I thought them darn near identical.  Like I said, though, people are picky about their blues.  While I couldn’t see it, I suspect more than one UK fan could have easily explained to me why it was Colts blue, not UK blue.
The more I thought about it, the more it rang true.  If you ask my son–or anyone who goes to his school, or even went to his school–what ths school colors are, he’ll say “Columbia Blue and silver”.  Not light blue, or sky blue, or just plain blue, but “Columbia Blue.”  My daughter’s fascination with periwinkle blue as a young girl is the stuff of family legend.  Other than Kermit the Frog, I wonder how many people who are as passionate about their green?  I suspect there might be some loyally finicky purple people out there, too.
Why is it that “what is your favorite color?” is a universal question?
Makes you think, doesn’t it?
Share
Categories: Knitting
Tags: BlueIndianapolisKentucky Book FairSuper Scarves

You're on to something. I have to make my brother a hat and scarf in Steelers colors for Christmas, so I looked up the wiki on it, since I don't know squat about football. There was a very detailed description of the particular shade of yellow, compared to other sports' shades of yellow. Luckily, I already have the correct yellow. Why? Because I love yellow. It's my favorite color. *grin*