The Skeins of Time 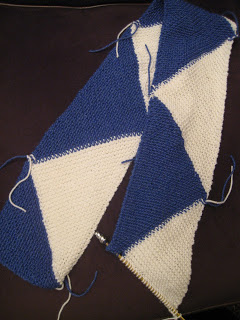 I thought I’d be bored by now.  It is the same pattern over and over after all (although I suppose most of knitting could be called doing the same thing over and over).  There’s something about this pattern that is just engaging enough.  Occupying but not taxing.  I’m not sure that it would hold my attention over a very long car ride–I might need something requiring more brainpower–but it’s perfect for my currently crazed life.  And every time someone asks me what I’m making, I get to explain the cool concept of Super Scarves.

But I’ve been thinking about the whole boredom subject…
As a new Kindle owner, I’ve keeping up on the device’s press.  Amazon shared a letter today from a Kindle owner stuck on Carnival’s infamous dead-in-the-water “Cruise to Nowhere.”  This user was smugly reporting that while everyone else’s iPad and laptops had long gone dead (I’m guessing the ship had no electricity? Seems hard to believe…), his Kindle was still going strong.  This enabled him to “enjoy” his “extended vacation.” I do admit I’m impressed that the device’s nearly month-long battery charge.
That’s one of the pleasures of knitting, isn’t it? We’re almost happy when the flight’s delayed, because it means more knitting time.  I have to say I smiled thinking about how delighted I would be if someone handed me four more days on a ship in the middle of the ocean (provided there was food and coffee, of course).
…As long as I had enough yarn.
Really, I think I’d get ugly if I had all that free time and no yarn.  I’d probably be unraveling someone’s sweater and knitting with chopsticks or something.  Come on, how many of us have snuck a spare knitting project in the corner of our suitcase just in case we finished the first one we brought?