I never met a picot border I couldn’t botch.

This one was no exception. Only I didn’t botch the picot, I botched the associated provisional cast-on. I have a college degree and I’ve been knitting for over a decade, you’d think a provisional cast-on wouldn’t prove much of an obstacle. Yet, somehow, I managed to do the cast-on (or maybe just the effortless pop-off of the stitches that should unravel on command) backwards. Instead of the stitches zipping off like magic, I had to unravel each of them individually. Not effortlessly at all. Annoying, time consuming, and rather humiliating. 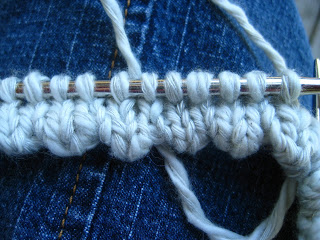 Did that stop me? No sirree. Just because I couldn’t make it work like it was supposed to doesn’t mean I couldn’t make it work. It was sort of the knitting equivalent of “winning ugly.” It did work, and I like the border a lot. The last picot border I attempted came out looking rather like the end of a fuzzy green saw blade. This one is actually cute. And the yarn is so soft. Definitely baby-worthy. The kind of yarn people involuntary “oooh,” after touching.

I was surprised by the abrupt color change–I think I expected it to be a dye graduation rather than connected pieces of different color yarn. No matter how I wrangle it, the knot always ends up in the wrong place. Still, Janet’s right about the pattern–it offers just enough change-ups to remain interesting while not taxing too many brain cells. I’ve got a cable fingerless mitts pattern if I want to stretch my gray matter–baby hats should be pure joy to make. And the heart pattern in the stitches? Adorable.

I did notice it has a bobble in a couple of rows…and I’ve botched my share of those, too, so stay tuned.

I am pretty new at knitting I can probably do the provincial cast on I did watch a YouTube video but I am a little confused when it comes to the "knit cast on stitches together with current row could you maybe explain that a little bit? Thank you

I found it easier to understand if I realized I was knitting a hem of sorts. The bottom edge is "folded up" and you're knitting the "fold" closed by attaching the first edge to the row that's part of the hat body. It's why the provisional cast on is needed. It is one of those things that would make loads of sense if I were sitting next to you to show you, but is hard to explain in words. My advice? Walk into your local yarn shop (or find an experienced knitter) to show you "in person." Hope this helps.

I admit that it's been a while since I did this pattern, but if I remember correctly, you are knitting the stitches together (like Knit2Tog)–essentially "sewing" your hem shut by making one stitch from the hat and one stitch from the hem into a single stitch. Does that help?