I’m not quite so nervous on the elongated stitch rows now. I’ve learned which stitches get slipped and which get “dropped” just by looking (the stitches you knit have a little brown “bump” from the garter stitch row below), so I’m not counting “knit, slip one, slip two, slip three, knit, slip one, slip two, slip three” like some sort of seated waltzing student anymore. 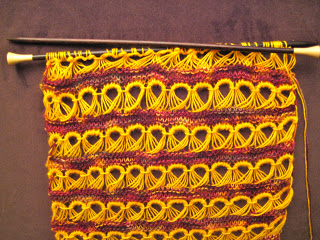 This pattern does have a bit of a learning curve. The first time you do the elongated stitch row, it looks like a tangled mess. You’ll be sure you’ve botched it until you do the garter stitch row above it, when all the loops lay themselves in a lovely line instead of knotting themselves up in chaos. Just count your stitches at the end of your elongated stitches so you know you’ve still got the sixty you started with–I somehow didn’t do all the wraps the first time, and things got, well, messy. Now, I just smile with satisfaction as all my little loops line up in impressive sequence. I have a juvenile “I made that!” urge of pride each time I finish my repeat. Once this scarf is done, I may be unbearably smug and harder to live with than usual.

For the many of you who asked where to get the pattern…as far as I know it is only available from Loopy Yarns, and I’m working on access. Stay tuned.

This is an extremely cool stitch pattern. Where did you find it?