Science and knitting, knitting and science… 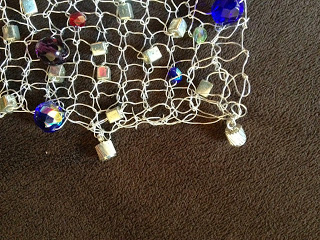 It always gets fun when science comes into knitting, at least at my house.  Usually because it involves me not comprehending some basic scientific concept and the males in my house–husband and son–snickering at the goof.  Without ever setting out to do so, I have managed to surround myself via marriage and birth with “science guys.”  Not just any science guys (friendly ones, for example, like Bill Nye the ultimate Science Guy) but ENGINEERS.

An ENGINEER would understand the working theories behind magnetic clasps.  An ENGINEER would recognize that magnets have poles, and that poles have very specific preferences as to the other magnets they hang out with.  (Of course, an engineer might not notice that I have ended the previous sentence with a preposition, so there is that.)

So an ENGINEER wouldn’t just dump the six clasps in a dish and willy-nilly go about sewing them to the cuff.  Sewing with wire, mind you.  Uncooperative, very hard to un-sew wire. 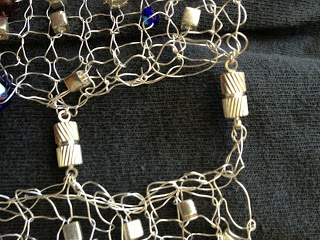 An ENGINEER would not end up with cuff ends that effectively repel each other.  Thus negating the whole concept of a bracelet, and ending up with a very pretty science project.

An ENGINEER would have been nicer to me as I said nasty words while undoing aforementioned mistake and re-sewed my clasps in appropriate, mutually attractive pairs.

I am not–in case it needs clarification by now–an engineer.  I have a theater degree.  Which means this tale would have been much more boring if told to you by…