It’s the first craft we learn, isn’t it?  Big wooden beads on a shoelace are my earliest memory of making something short of paper and crayons.  There’s something so essential, so fundamental in stringing beads.  I was startled by how deep and peaceful I found the process. 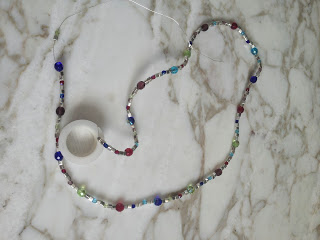 I knew that essentially this had to be random.  I wanted it to have that “just short of a kaleidoscope” look I saw in the bottom of my Tupperware.  It’s just that I never seem to be able to do “random.”  I don’t have the artist’s instinctual eye for it–it always comes out looking messy rather than casual. 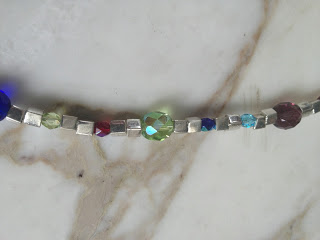 I, who make up things–whole novels, and over twenty of them–on a professional scale, can’t make up a random string of beads.  What does that say about me?  I think it says what I’ve always known;  words are my mother-tongue, and yarn is my accent.  Beads are a venture outside my basics, like a new cuisine you try occasionally but could never eat every day. 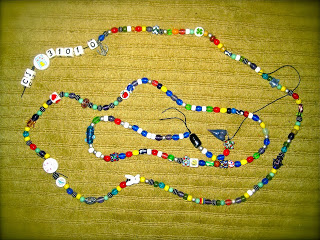 A brief bead-aside here:  my very favorite string of beads are the Beads of Courage my son received while in the hospital.  Every bead denotes a procedure, a milestone, a challenge, a step in his journey from diagnosis to remission.  We dismissed the project as “little kid stuff” and “silly” at first, only to later realize what a powerful memorial it had become.  My boy’s strand is over six feet long! My deepest thanks to those who make these lovely beads for kids battling illness.