Kinks in the wire…


Okay, this is weird.  The wire is flexible, but has nowhere near the flexibility of yarn.  I feel like I’m wrestling this stuff onto the needles.  The stitches don’t line up nicely next to each other like yarny cast-on’s, they fidget and fight each other like nap-starved kindergarteners.  At least there’s no concern for elasticity. 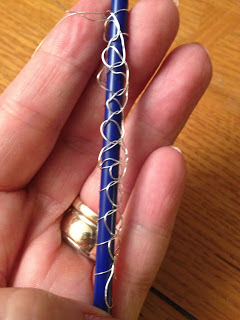 To make matters worse, I couldn’t quite figure out which end to cast on.  Which, of course, meant I invariably cast on the wrong end.  I needed to cast on in such way that the beads were lined up on my working yarn.  I still can’t quite explain how I did whatever I did to end up with all the beads lines up on the wrong end of the yarn, but I did.  The only thing worse than casting on with wire is undoing a cast on, which is because it can’t be done.  I had to cut off the twelve cast on stitches and rework my beads.  Sigh.

It doesn’t appear neat and tidy to me.  I don’t like the kinks in the wire–I was expecting smooth loops for stitches, but they look all wobbly.  I have a feeling that the finished product will look like aforementioned kindergarteners did the stitching.

Now, now, Allie a single cast on row is a bit early to judge.  Remember, Karen told me I wouldn’t like it at first.  So she’s right, and there’s some trustworthiness to that.  I’ll keep going.