I find hats even more satisfying than socks.  Mostly because there’s only one of them, so when you’re done, you’re done.  Hats also seem to offer a wide range of structural options, where socks pretty much are…foot-shaped.  Granted, both leave lots of room for creativity and both are marvelously portable.  Still, I maintain that hats offer the most bang for your creative time (shawls, while my absolute favorite, do seem to take longer).  Plus, when you live in Chicago, a winter hat is pretty much a survival tactic.

I’ve been looking forward to working with a chain-construction yarn.  While I’ve also such yarns in large scale versions–finger-thick, rather like knitting with an giant’s i-cord–this one is tiny.  On the upside, it makes for an incredible loft and softness.  This is some seriously squishy yarn–perfect hat material.  On the downside, it’s like working with six-ply, which gives you millions of splits to avoid. 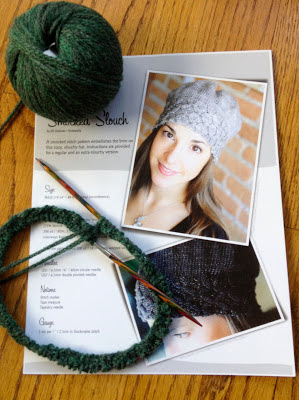 The smock stitch is a smart addition to my knitter’s toolbox.  It looks complicated but is rather simple (my favorite kind of yarn trick!).  Like most stitches, it’s best learned in person or on video, but I did manage to pick it up by the written directions–the second time.  I won’t lie that it took several attempts to get it right.  I’m glad I had a photo of the finished band to guide my exploration.

I do like the texture and the bit of panache this ads to an otherwise workaday hat.  So far.  Only a few inches in is no place to declare your affection (or lack thereof) for a knitting pattern.