I’m going for it… 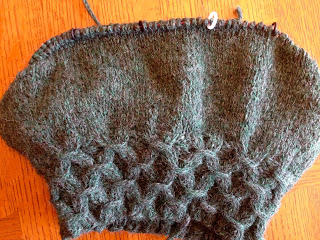 I had a choice here–slouchy or extra slouchy–and I’m going for the extra-slouchy.  I figure if I’m going to go, I might as well go big.

I tried the thing on, and it didn’t look very slouchy at all at the regular point, so I’m hoping the extra-slouchy version isn’t going to be like a British Racing Green mushroom landed on my head.  Hmmm.  I may be eating those words in a few days.  I feel another video reveal coming on…. 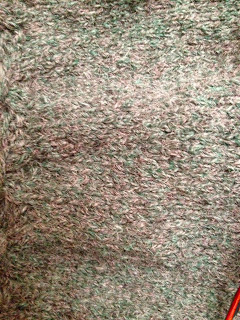 At this point in the pattern, it’s just rounds and rounds of stockinette.  Another place where continental knitting comes in handy.  I really do feel every serious knitter should be proficient in both Continental and American techniques.  Switching off can help with finger strain, carpel tunnel prevention, and speed for things like ribbing and stockinette.  If you venture into colorwork, it will be a definite plus to be able to carry yarn in each hand.

Now that I’ve got my eye out for them, slouchy hats are everywhere–just not on anyone my age.  As an experiment, an 30-minute internet image search produced only two women who appeared to be anything close to my five decades.  What it did produce were gazillions of Justin Timberlake and Taylor Swift types.  It also produced several blog posts discussing whether or not the slouchy beanie’s time had come and gone.  Yikes. 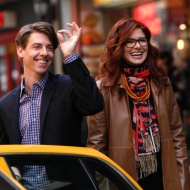 I may truly be out of my depth here.  The only thing close I found was that Debra Messing (who sports some pretty awesome knitwear throughout the show) wore one in a scene from the TV show Smash, and her character has a teenage son. IMDB lists her age as 44…and it’s a pretty stunning 44 if you ask me.  In other words, kinda similar but not really.

However, I do have a teenage son as well, and I suspect he will be rolling his eyes and moaning “Give it up, Mom, and act your age” any second now.

I knit on in defiance.  Who’s with me?  Anyone?  *waves arm in the dark*  Anyone?  Hellooo?
Share
Categories: Knitting